I never quite understood the fad with taking selfies. I’ve always though that they looked stupid the majority of the time and the people doing it were dumb. Then again I never really understood the whole thing with Facebook or any of these other social media things that are all the rage these days so many I’m just a grumpy old man. Anyway, in what can only be described as the best use of technology ever, pretty soon we will be giving our babies the ability to take their own selfies and post them to the internet.

I wish I was making this up, but some things you just can’t make up. The designer of this new toy got the idea after realizing that all the dumb baby pictures she would get on Facebook were posted on there by the parents who thought their babies were cute. Then she realized that the babies never had any say in whether their pictures were going on the internet and that we should make a toy so that they can decide what to put online. Ignoring for a second the fact that babies are dumb and still wont realize that pulling on the little stuffed F will upload a picture of them to Facebook, at least the pictures the parents would upload would be decent quality. Now the internet will be full of nothing but closeups of a babies mouth as it is about to eat the little F. 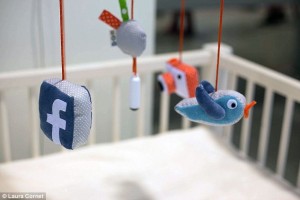 I guess it is all fair in the end though. After all, your baby will now be able to not only annoy you with its constant crying and wanting everything it can’t have, but now it can also tug on a toy and annoy all of the internet with constant twitter status updates and facebook pictures. I don’t know about everyone else but if there was one thing I wanted to see online, it was the combination of dumb selfie pictures with stupid baby pictures.