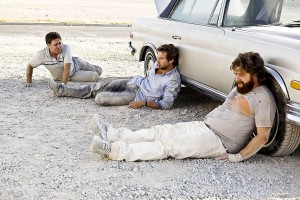 If you’ve been around the stream before you’ve probably heard my talking about my life goal of having a bachelors party in vegas to recreate all the best moments from The Hangover.  Who wouldn’t want to wake up one day after a long night of partying to find a tiger in the bathroom anyway?  Today I found a backup plan just in case I am unable to make it to Vegas.

Turns out this other group of guys went camping for their bachelors party.  Not quite the big spenders that Vegas would be, but who doesn’t like going into the woods with a ton of alcohol and adventuring around.  I can only assume that while they were running away from some wild animal that they poked when they shouldn’t have that one of them tripped over something in the sand.  That had to be the point when they see a giant face staring up at them and they realize they found something kind of interesting.  The next part is what I actually found most interesting in the story.  After they found the head they went and called the experts to come out and take a look to see what they found to later find out that it was a couple million year old stegomastodon fossil.

They did what now?

Yep,  you heard it correctly.  At a bachelors party in the woods, after finding something strange they call the experts?  Maybe it’s just me but if I was at a bachelors party and found something strange, the last thing on my mind would be to leave it alone.  I would have probably tried to dig it up, wear it as a hat, and then eventually strategically place it somewhere in the camp site to scare the shit out of my friends the next morning.  Maybe it was one of those new bachelor parties I’ve been hearing so much about where they go to a pancake house for breakfast instead of doing anything fun.