Today being the 4th of July, I thought it would be appropriate to talk about something we all know and love, America.  But what is there to talk about you might ask?  I could write about how we should be celebrating 2 days earlier than we actually do.  Or perhaps we should talk about two of the founding fathers died on the same day with a third passing away years later also on the 4th.  Instead I thought it would be interesting to talk about a true American symbol, the bald eagle, and how Benjaminn Franklin was wrong. 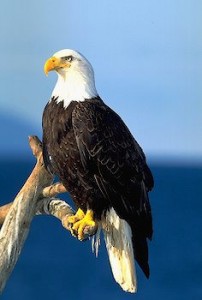 Bald eagles and Americans share many things in common.  Like most Americans, the eagle can be found all over North America.  Last I checked, it is also illegal to shoot both bald eagles and Americans.  Apparently these many many reasons were not enough to convince big Ben and he still had his doubts about the eagle being on the national crest.  You see way back in 1784, Benjaminn Franklin wrote a letter to his daughter where he talked about his real thoughts on the bald eagle being on the new republics crest.  In part of the letter he wrote:

“Others object to the Bald Eagle, as looking too much like a Dindon, or Turkey. For my own part I wish the Bald Eagle had not been chosen the Representative of our Country. He is a Bird of bad moral Character. He does not get his Living honestly. You may have seen him perched on some dead Tree near the River, where, too lazy to fish for himself, he watches the Labour of the Fishing Hawk; and when that diligent Bird has at length taken a Fish, and is bearing it to his Nest for the Support of his Mate and young Ones, the Bald Eagle pursues him and takes it from him.”

When he puts it like that, it does make a little sense but if you stop to think about it for a second, it turns out the the eagle was a perfect bird to represent the most badass nation in the world.  After all why go through all the work of catching the prey yourself if you could just wait until it is done for you and then eat the rewards?  Does it really matter how you got the fish or does it only matter that you ended up with the fish in the end?

So what did he think should be the bird to represent America?  The turkey.  I guess it could make sense to make a big fat bird the official bird of a big fat nation. But if we did do that, then what would we eat at Thanksgiving?