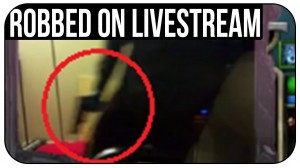 Thanks to the wonderful viewers at my stream for telling me about this story.  Apparently the other day a couple people broke into a persons house to steal some guns and other stuff.  Something that happens so often, it’s easy to forgive you if you don’t really care.  This time it was different though.  You see this time they ended up breaking into someones house, while they were in the middle of streaming their Dota 2 game.  Watching the video you can see someone walk past the webcam a few times with a gun in his hand.  Eventually the lights get turned off, and at the end it looks like they steal the webcam itself.

Why’d they do it:

I’m sure there are plenty of theories on why they broke into this house, but I’m going to give you my theory on why they decided to pick that house and at that time.  Since from what I’ve heard the streamer was a relatively popular place to hang out, the people the broke in were problably viewers who were frustrated that she wasn’t playing the game they wanted to see, PayDay 2.  Instead of going to a different stream that probably had maybe two viewers, they thought it would be better to just reenact the game themselves.  So they grab some guns, use their hacking skills they picked up playing Watch Dogs to find out where she lived, and play PayDay 2 with her being one of the hostages.

One of them must not have played the game very much though, since he hung around the place too long until the police showed up and caught him.  It you look closely at the video below, you can also see that they forgot to grab their masks.  Lets how he spent some time playing Prison Break so he will know what to do when he is convicted.

All jokes aside, it’s good to know that nobody was hurt and I hope that they are able to get their stuff back soon.